CEDAR RAPIDS, Iowa (Sept. 27, 2018) – As part of CRST’s two-year succession plan, CRST International Inc.,one of the largest privately held transportation and logistics companies in the United States, today announced that Dave Rusch, current President and CEO, will retire effective Dec. 31. Hugh Ekberg, current COO and Group President, will become President and CEO, effective October 1. Rusch will remain in a full-time advisory capacity to John Smith, Chairman of the Board for Admiralty Holdings and owner of the CRST International family of companies, until Dec. 31, and will remain on the CRST board of directors going forward.

After being a special agent for the FBI, and 10 years of increasing responsibilities in operations and finance for North American Van Lines, Rusch joined CRST Malone as vice president of operations in 1991. In 1998, Rusch was appointed president and COO of CRST Van Expedited. According to Smith, Rusch turned the Expedited operating company into a streamlined, operationally efficient and profitable entity within a short timeframe, earning him additional responsibilities and promotions. Rusch was named president and CEO of CRST International in 2010, following Smith’s retirement from that role.

“Dave is one of the best operators in the industry and the master of negotiations,” said Smith. “He has acquired five trucking companies, significantly grew our revenue and charted the course for CRST to be debt-free again next year. Dave has brought CRST financial stability and operational excellence. We are most grateful to him for his 27 years of dedicated leadership to CRST, our employees and our customers. He’s an industry veteran who should be proud of his legacy, which includes positioning the company for continued growth and success.”

Over the course of his career at CRST, Rusch has accomplished many milestones, most notably:

“As I reflect upon my years at CRST, I couldn’t be prouder of the complete transportation and supply chain solutions the men and women of our eight operating companies have built together,” said Rusch. “Our comprehensive offerings coupled with our employees’ ingenuity and can-do spirit allows us to deliver a seamless customer experience. Today, we are stronger than ever and an industry leader in both growth and profitability. As I look to the future for CRST, I am confident in the company’s continued success under Hugh’s leadership as CEO.”

Ekberg joined CRST International in September 2016 as COO and Group President, bringing over 25 years of strategic business leadership to the CRST family of companies. He last served as President – Kitchen & Bath Americas for Kohler Company. Prior to Kohler, he was Division President and a board member at Weitz Company, a full-service general construction and design-build firm. Prior to Weitz, Ekberg was with Hirsh Industries, a manufacturer of consumer and commercial storage products, and served in various progressive roles, including EVP of Operations, COO and President.

“Considering Hugh’s extensive expertise in corporate strategy and strategic growth, leadership and multi-site management, we are thrilled to have an executive of his stature named as CEO,” said Smith. “Hugh’s strengths will complement and enhance CRST’s strong team of operational executives. We look forward to Hugh leading CRST through the next chapter of our company’s growth and success story.”

“CRST is an outstanding company with a tremendous future and a talented, passionate team,” said Ekberg. “Our team coupled with our multiple service offerings provides a full-service transportation offering to grow our customer base and beat the competition.  I’m looking forward to continuing to build on those strengths in the coming years.  The industry is experiencing substantial change and disruption, which offers tremendous potential.   I’m honored to have the opportunity to lead this company in the future.” 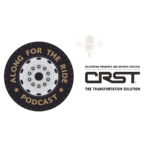 Along for the Ride Podcast #15 - CRST President & CEO, Hugh Ekberg 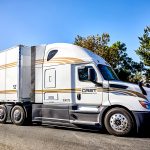 How to Keep Shipments Safe and Secure